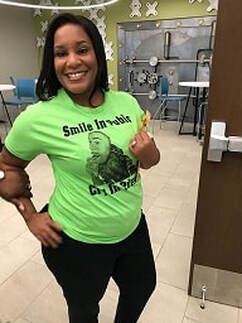 RASHAWNDA'S STORY:
“I was a single mother of 2 children; Isaac, my energetic son, and Alayshia, my social butterfly.  I grew up with barriers in my emotional and spiritual growth, such as low self-esteem, anger, mental, physical and verbal abuse. I was anxious,
​depressed, and at times, suicidal.
On February 3, 2015, my children’s school had called to inform me that Isaac had gotten physical with Alayshia.  This was not the first phone call of my son misbehaving, and frankly, I was beyond frustrated. When I went to pick up Isaac, anger got the best of me and I was caught on camera disciplining him in an unacceptable way.  The next day the police were at my door, taking my children from my home… From ME. I felt my life was over anyway, so I attempted suicide by swallowing half a bottle of pills and a bottle of liquor. But God wasn’t done with me yet.  I survived, and from then on, began living the fast life, to avoid having to address what was actually going on in my life.
​But on July 8th, as I was rushing home from work, I was pulled over and arrested for a felony warrant.  In October 2015, I was released on probation and a month later, I was invited to attend a fundraising event.  That’s where I met Jenice Jones, founder, CEO, and President of Just The Beginning. After listening to a participants testimony, my life was transformed!  As a result, I have been reunited with my children, am happily married, obtained great employment, and have a whole new outlook on life.”

MARIA'S STORY
“I am not the person I was yesterday.
Today I am the best version of myself yet.
Tomorrow I’ll be better than I am today.”

18 months ago, I thought that it was the end for me.

In January of 2018, my 22-month old daughter had tragically passed in a house fire. After that, I really had no idea why I was still alive. I feared going to bed for a long time. When I did sleep, I would wake up screaming and crying. I would get high and try to stay high as long as possible, terrorizing any and everyone around me. Everyone had to hurt like I did, but at the same time, no one could ever truly understand my pain. And because of that, I had become a pariah. Everyone hated me, and most of all, I hated me. For 8 months I physically, mentally, and emotionally ran myself into the ground and didn’t care much about hurting myself or anyone else. Soon after, I went to jail. I sat there for 10 months, where I prayed for a way out of this life. I was facing 15 years on an 85% violent charge. I wanted to change. I didn't want to feel this hurt like I did. When I was adjudicated to Just The Beginning, I knew it was God telling me he hasn’t left me. And even after a short time of attending this program, I realized he never would. Even though I still mourn for my daughter everyday, this program has been with me every step of the way. They’re helping me figure out my process so I can progress. They’re teaching me that with faith, nothing is impossible for God. They’ve helped me discover my self-worth and encouraged me to be strong and resilient. And most of all they’ve shown me that my life circumstances and my case don’t make me and certainly aren’t the end for me.